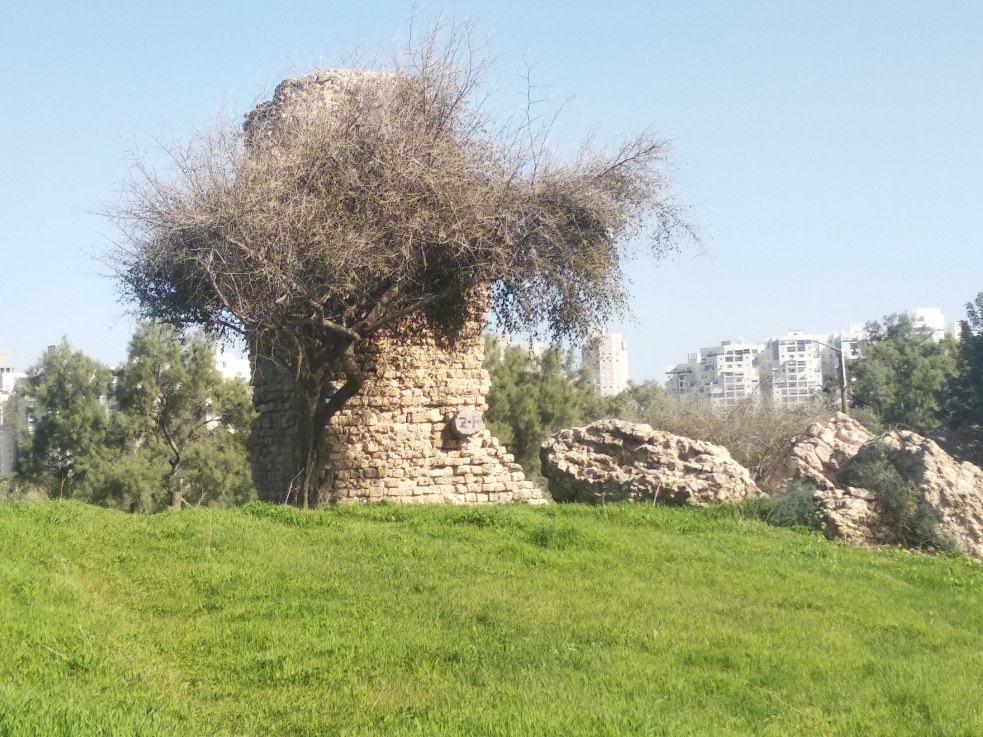 Last blog was in November, as we don’t seem to have done a whole lot, except short hikes in the forests, looking for flowers (found plenty, especially in Ben Shemen, Yakum and Rosh Ha’Ayin ). But yesterday, since rain is forecast from tomorrow for an indefinite period, we decided to take advantage of the wonderful winter sunshine to head off to Ashkelon National Park, which we have not visited in a very long time. Having renewed our pass when we were up in Bar’am, ( did I not blog that one? Oops!) we could just swan in for free as usual. However, on arrival at the gate, there seemed to be some kind of computer mishap, as the man in front of us sat in his car waiting for a ticket for rather a long time. Finally we got in and started to drive around the ring road that circles the park, stopping at the different sites. The day was glorious and the place nigh on deserted, except for a preponderance of workmen. They seem to be revamping the whole place. (And a quick Google reveals this to be the case

The first stop was the church of Santa Maria, or what’s left of it. Despite being pretty much in ruins, the site is very imposing, and you can climb up the steps next to it and get a view of the sea and the remains of the 12th century Crusader wall. Of course Ashkelon is an ancient city which was home to many different civilisations, the ancient Canaanites, the Philistines, Byzantines, Muslims, Ottomans and Crusaders.

We continued on to the oldest arched tunnel in the world, a Middle Bronze Age gate said to date from 1850 BC. It has of course been reconstructed, but the site is most impressive and you can see the rampart walls, the Roman basilica and lots of broken columns and other bits lying around, which I assume are in the process of being restored.

From the arch you can walk up a slope which takes you to a fantastic lookout point over the sea, giving you a really good sense of how the ancients knew where to build their cities. History buffs can of course read more about the details of all the archeological finds here . Suffice it to say that the major finds from the site now reside in the Israel Museum, but the impression we got is that a lot of work is now under way at the site, and it may well be worth a return trip in the near future, to see what else has been restored.

After eating our sandwiches on a lovely bench in the overnight campsite part of the park we decided to head to the promenade of modern Ashkelon, where we wanted to do a bit of promenading and then catch the sunset. This proved to be an extremely good move. The weather was glorious, the views spectacular and the people of Ashkelon were out walking their dogs and running, but not in hordes. We had a quick ice cream on the prom and admired the whale statue which is in fact a kids’ slide. We also liked the bench which doubles as a lending library, and the sofas which are modern art.

Next we headed to the marina which was full of people eating and drinking in the many restaurants, and where we found a most wonderful hotdog in a place called Captain Hot Dog, manned by a charming Russian girl. We enjoyed this while sitting and admiring the view. When the sun started to go down we headed back up the hill to the promenade. As soon as the sun had set it became very cold so we headed home after a really refreshing day. Ashkelon, we shall return.