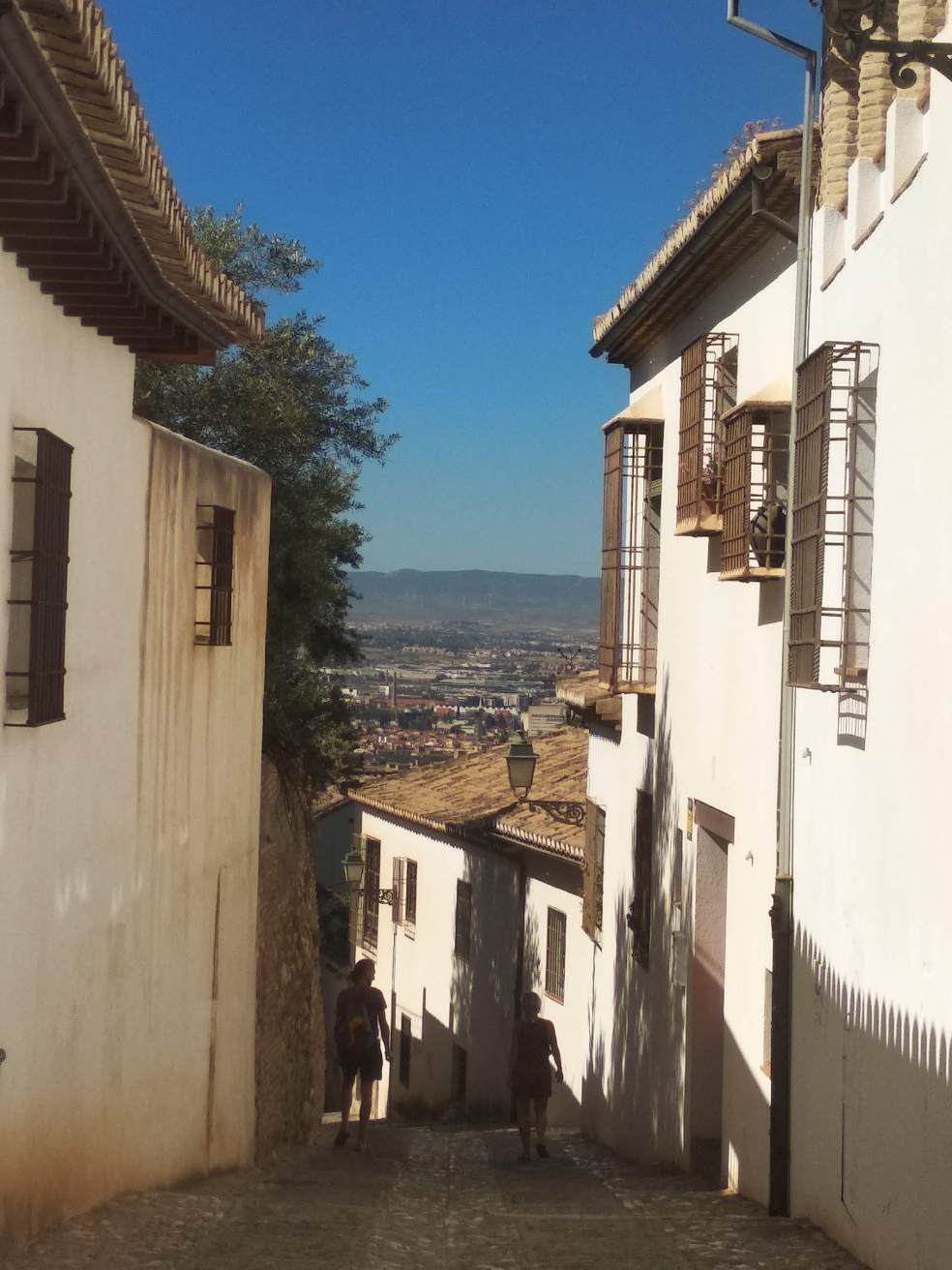 On the way from Granada to Cordoba we stopped off at the town of Antequera to see the dolmens. This is a megalithic site featuring three monuments, Dolmen of Menga, Dolmen of Viera and Tholos of El Romeral. WE only saw two, but the brand new (free) little museum at the entrance to the site, explaining the discovery and explanation of the megaliths was really rather splendid. We very much enjoyed our brief stop.

Then we continued on our way to Granada. After the laid back seaside feeling of Malaga Granada had an altogether different feel to it. It seemed a bit like driving from Tel Aviv (happy, colourful beach city) to Jerusalem (heavy on tradition and history). We had rented an air bnb in the outskirts, about 30 minutes walk from downtown. But we had not counted on the intense heatwave, which made the walk there and back rather taxing. We strolled around the old part of town, the tiny streets around the Cathedral area, with the magnificent Alhambra and Generalife towering over us. We were suddenly very hungry and then discovered that between around 2pm and 8pm it is impossible to find a soul in the street, let alone an open restaurant. The siesta is sacred. Fortunately just as we were getting desperate, we found the wonderful Vega’s cafe serving the best fresh sandwiches and drinks, everything full of lovely vegetables and fresh fruits, the likes of which we had not seen since arriving in Spain. The bread was fresh and the service welcoming.

There seems to be nothing left of the Jewish presence in Granada, except a museum and a statue of Judah ben Saul ibn Tibon (much like the rest of Andalusia).

After walking around town a lot, we felt the need for some nature so the next day we drove up to the Sierra Nevada, where you can see snow all the year round, despite the crushing heat. The drive up to the small ski town was gorgeous and we stopped off at the Hoya de Pedraza Botanical gardens on the way. The view was stunning. On arrival at the actual town of Sierra Nevada we discovered it to be deserted. Apparently when it is not the season there are no people there whatsoever, let alone any coffee bars or restaurants open. We met a bewildered Singaporean couple also looking for a bite to eat. We gave up and on the way back down the mountain to the city we found a delicious cafe frequented by passing cyclists, where the surly waiter produced a perfect oven cooked pizza with all the toppings.

The following day we had booked a tour of the Alhambra, which I thought was guided but turned out not to be. We got up early and left at 6.30am hotfoot to the meeting point, up a massively steep hill of course. You really need a whole day to experience the wonder of the Alhambra and Generalife complex as it is enormous and stunning. I think my favourite part was the gardens of the Generalife which were just fantastic. I don’t have the words to do justice to the place, and the photos certainly don’t either.

Our last day in Granada we arranged to meet up with my very good friend’s son Guy, who has been living in Granada for a year to study flamenco guitar. He very kindly agreed to show us around Albaicin, the ancient neighbourhood where he lives, which is right beneath the Alhambra and has spectacular views over the city. Since we were feeling somewhat exhausted from the tour, and the walk into town is long (and Guy had warned us of the hilly nature of Albaicin) we opted to get a bus down from our apartment, which turned out to be quite easy, until the bus failed to follow the route on my app. Various kind ladies helped us get off at a convenient spot, and from there we puffed up (another) extremely steep hill to meet him. Albaicin really is very splendid and we enjoyed walking around there very much. There were several groups of school kids having historical tours of it too.

Our penultimate Andalusian city, Cordoba was I think my favourite. I was expecting to be blown away by Granada (and I was) but somehow when we arrived in Cordoba I felt that I was home. I just don’t know how to explain it but somehow a place just makes you feel that you belong, and that is exactly how I felt about Cordoba. We only had two days there, as opposed to 4 in Granada. But for me it was possibly the highlight. I knew that the guided tour of the Mezquita would be wonderful, but just hanging out in Cordoba was a joy and not just because there was a feria (or fiesta) going on there. The streets felt wonderful, the general ambience of the place was just spectacular. This was the only place that we stayed in a hotel (because all the places were booked up months in advance for the feria) but it was fine, as Hotel Oasis was clean and comfortable and only a 15 minute walk from the stunning Roman Bridge which I instantly fell in love with.

In Cordoba we wandered the old Jewish quarter, found a statue of Maimonides (the Rambam) who was born in Cordoba, and the old synagogue which is beautifully restored, and the Casa de Sefarad, containing a nice little museum of the Sephardic Jews before the Inquisition. It was all so wonderful.

The tour of the Cathedral Mosque known as the Mezquita was just spectacular. We booked an English speaking tour with Viator, fortunately for 4pm , when it was already not so sweltering. The guide, Angel was both knowledgeable and charming, and did not stop the tour after an hour but was available to answer more questions after the end. We were also able to remain inside the mosque until it closed at 7pm and get more of a relaxed impression of the place than is possible while you are following your guide around. It was just breathtaking. I think it is possibly one of the most beautiful buildings I have ever seen and it was clear that Angel loved it too. Again it’s impossible to take a decent picture of it. Even videos hardly do it justice.

On the way from Cordoba to Carmona , our final stop, we spied an imposing castle right on top of a hill . The signpost said Castillo de Almodovar so of course we had to check that out. After sweating up a steep hill we discovered we could have driven up the top. We didn’t really have time to explore inside but the castle outside and the surrounding views were quite splendid.

The historic town of Carmona, 20 km from Sevilla airport, was where would spend our last two days. Here we stayed in a wonderful apartment Casa en la Juderia at the brilliant address of 1, Jewish neighbourhood street (Calle de la Juderia). We had a slight problem getting the key when we arrived but the host answered us promptly on Whatsapp and we were soon ensconced inside and free to wander around the town, which is chock -a -block with historical wonders, amongst others a Roman Necropolis and theatre ( lovely little free museum) and a lovely old town wall with ancient gates that reminded us of Jerusalem.

The visit to the Roman Necropolis and theatre , a 15 minute walk from the Juderia ,was lots of fun as there were several groups of schoolkids on trips there, dressed as Romans reenacting various historical scenes with explanations by guides dressed as centurions. It was all rather endearing and the museum guides were extremely helpful too. WE thoroughly enjoyed our days in Carmona, and finished our trip with wonderful tapas at Bar Goya next to the main square of the Juderia. And with this our amazing time in Andalusia drew to an end. Our sense of the sheer amount of heritage and history in this area was incredible. Now I feel I need to do some more reading up to absorb what we have seen. Stay tuned for next adventure!

7 thoughts on “The Splendor of Andalusia Part 2”